Everyone wants to know how to put backspin on a golf ball.

It can be frustrating to hit a nice iron shot that lands on the green but then watch as it just rolls off the back of the putting surface.

And, every once in a great while, you’ll hit a shot that lands and stops on a dime... just like the pros.

Your reaction: How did I just do that?

Well, the key to understanding why you’re often unable to put enough backspin on the ball to make it stop is in knowing what factors affect the creation of spin and what you can do to control that process a little better.

The way that the pros are able to generate all that backspin, so that the ball literally stops almost as soon as it lands on the green, is impressive to watch.

Understandably, amateurs are astounded when they see that and are left to wonder why their shots don’t behave in the same way.

Well, one of the reasons that the pros on Tour have their names on their bags (and amateurs don’t) is because they know how to create the conditions that maximize the amount of backspin that’s generated on a shot.

In fact, there are a large number of conditions that must be present.

The better your awareness of what these factors are and the better you’re able to implement them, the greater the amount of backspin you’ll be able to generate.

The first step to a better understanding is to learn how spin on a golf ball is created.

Without getting too much into the physics of spin, it’s interesting to learn how backspin is actually generated in the first place.

Backspin is generated when the bottom of the club head makes contact with the back of the ball with a downward force.

This contact causes the ball to be compressed, and the friction between the club head and ball results in the backward spin.

There are a variety of factors that contribute to the amount of backspin that golfers are able to impart on their ball...

But at its most basic, the two predominant influencers of spin are:

What About the Grooves?

The grooves on the club face play a role, but not in the way that most people think.

Contrary to popular belief, it’s not the grooves that create the spin.

The friction caused by the compression of the ball against the club face, combined with the loft of the face, does that.

The role of the grooves is to channel water and other foreign material (grass, e.g.) away from the club face in the same way that treads on the tires of your car channel water away.

This provides a cleaner surface for better friction to occur.

It may sound obvious, but the greater the friction between the club and ball, the more backspin will be produced (all other variables being the same).

The amount of friction you’ll get, in turn, is impacted both by:

(1) The equipment that you’re using.

(2) How much grass or other debris comes between the club face and the ball.

To generate maximum spin (i.e., to create maximum friction) you should first invest in some high-quality wedges.

Premium wedges with fresh grooves will simply impart more spin on the ball.

As we mentioned earlier, grooves don't make quite as much difference as most people think, but they do make some difference.

And you should remember that the goal we’re seeking isn’t necessarily to spin it like the Tour pros do, but rather to just get more backspin than you’re currently getting, so addressing all of these factors is important.

You should also remember to always make sure that your equipment is clean and the club face is dry.

Moisture that accumulates on the face will make it almost impossible to get sufficient friction.

A relatively recent trend on the PGA Tour is the utilization of wedges that have a “raw” finish on them.

These are wedges that don’t have the high polished chrome finish that most golfers have on their wedges.

The raw face on one of these wedges is designed to naturally rust over time, which is exactly what these pros are going for because they know that the rusted finish will create more friction when they hit a shot. 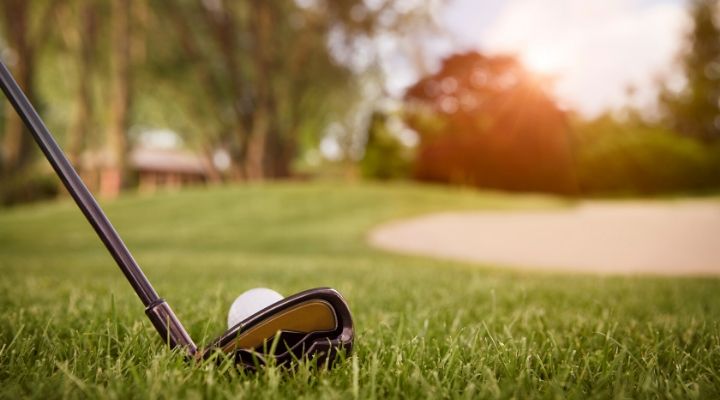 Another prime factor, perhaps the biggest factor, that influences the amount of backspin you can get on a golf ball is something called - Spin Loft.

It’s a little complicated, but it’s an important concept to understand, so let’s try to simplify it a bit.

To understand Spin Loft, we need to first describe two other terms that are relevant:

For instance, if you hit a shot with a 52° wedge, but at impact your hands are ahead of the ball (creating a forward shaft lean), you’ve essentially de-lofted the club face and are hitting the ball with an actual (dynamic) loft of something less than 52°.

Attack Angle is the vertical angle at which the club head approaches the ball coming into impact.

For example, a sharp, descending angle of attack would be described as being “steep.”

A flatter angle of attack would be described as being “shallow.”

Spin Loft then is approximately the difference between the dynamic loft and the attack angle.

Studies that have been conducted using the Trackman launch monitor, have shown that spin loft is optimized at between 45° to 50°.

So this shot would fall into that ideal range where spin would be maximized.

However, it’s also important to note that once the spin loft is at a point higher than the ideal 45°-50° range, the amount of spin can actually begin to decrease.

So trying to artificially increase the spin loft by dramatically increasing the attack angle, for instance (by chopping down on the ball with an overly steep approach to the ball), can actually be counter-productive to the process of trying to increase spin.

Many amateurs have been taught that to get more spin, they should hit down sharply on the ball.

As you can now see, that’s partly true... but only to an extent.

Getting too steep will end up costing you spin.

Any Other Factors That Affect Spin?

Amateurs should be aware that they do, in fact, put backspin on every shot.

That’s simply a matter of physics.

A ball’s reaction to being struck is to immediately begin a backward rotation, whether the club is being wielded by a professional or an amateur.

What usually separates one from the other, however, is the amount of backspin.

Pros know all of the factors that influence it and are able to generate more of it.

In addition to the two primary factors of friction and spin loft, the amount of spin you impart on the ball is also affected by several other things:

Let’s explore each of these factors in turn and get a better understanding of how each one impacts the amount of backspin on a shot. 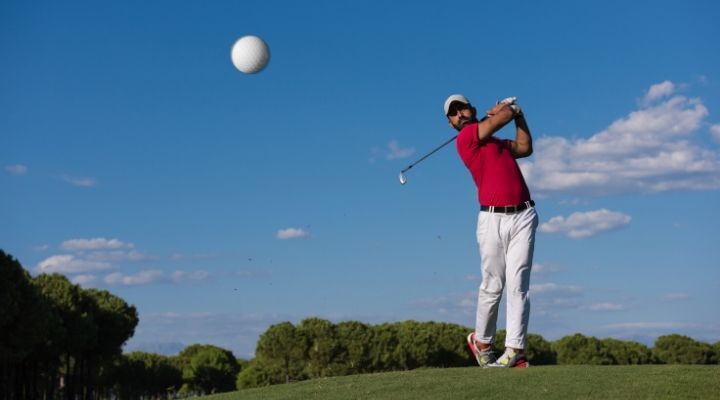 When we speak about the quality of the strike, we’re referring to several things:

When this happens, a high degree of speed is transferred to the ball.

When contact moves away from the sweet spot (i.e., more toward the heel or the toe of the club), ball compression decreases, along with backspin.

Hitting the ground before the ball (usually referred to as a “fat” shot) causes there to be too much grass between the club face and the ball.

This obviously reduces or eliminates the possibility of creating any friction to impart spin on the ball.

For all good golf shots, it’s essential to make contact with the ball first and then the turf.

This is a prerequisite when learning how to put backspin on a golf ball.

You may have seen one of those slow-motion videos that capture the instant when the club face strikes a golf ball.

If so, you saw how the ball actually de-forms upon impact, or “squishes,” before rebounding off the face.

That deformation is what’s referred to as compression.

The closer to the center of the face that the ball is struck (i.e., on the sweet spot), the better the compression and the better the results of the shot.

The ball will generally fly farther and have more spin.

It goes without saying that the pros are extremely good at finding the sweet spot on almost every shot and, as a result, their level of compression is quite high.

Because amateurs aren’t able to find the center of the club face nearly as often, it’s understandable that they’re not able to consistently compress the golf ball.

If there’s grass, mud, sand, or any other matter between the clubface and the ball at impact, some or all of the grooves won’t be able to make quality contact with the ball.

As described earlier, this reduces friction along with the amount of backspin you can impart.

This is why it’s difficult to spin the ball out of the rough. Grass gets between the clubface and the ball.

Therefore, when you find yourself in the rough, your shot preparation should include compensation for the fact that the ball will likely roll out a bit more after landing due to reduced spin.

All clubs, even drivers, generate backspin.

However, higher lofted clubs, such as sand wedges and lob wedges, will generate much more.

If you’re in a situation where you’d benefit from increased spin on your shot (e.g., a pitch shot from 30-50 yards), choosing a higher lofted club will help you attain that spin.

Remember the role of “spin loft” in generating backspin:

A higher dynamic loft (which will be attained most effectively by using a high-lofted wedge) along with a descending attack angle creates maximum spin.

One of the reasons that pros create more backspin than most amateurs is that they’re able to generate more club head speed.

A ball struck with a club moving at 90 MPH, for example, will generate much more spin than a ball struck at 70 MPH.

But regardless of your actual swing speed, it’s important to accelerate through the ball if you want good backspin.

At any speed, a swing that decelerates into impact will generate less spin than a ball hit with an accelerating stroke. 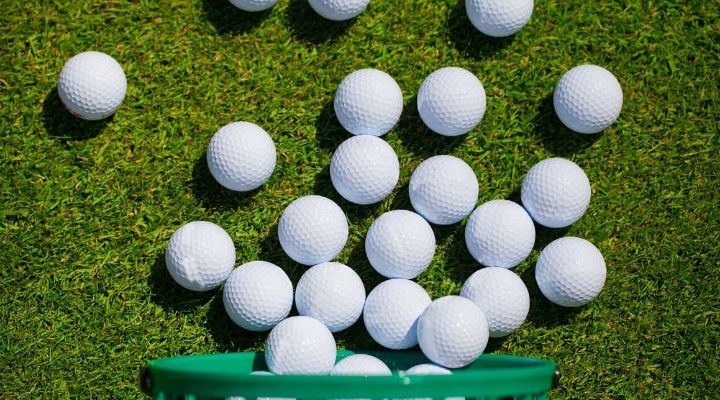 4. Quality of the Golf Ball

One of the main reasons that today’s “premium” golf balls carry premium prices is because they incorporate high-end materials and advanced design attributes that contribute to a better spin profile.

If you can afford to play these higher-priced golf balls, you’ll see an improvement in your ability to get the spin you’re looking for.

However, if premium golf balls aren’t in your budget, and spin is still a concern of yours, make sure that you use golf balls that are advertised to have high spin (as opposed to long-distance) characteristics.

Lower-priced golf balls that are designed for distance usually attain that distance at the expense of spin and feel.

A Summary of  How to Put Backspin on a Golf Ball

The following table provides you with a quick summary of all the factors that influence the amount of backspin that you’ll be able to impart to your golf ball.

Remember, though, that it’s unrealistic to expect that you’ll be able to produce the kind of backspin produced by PGA Tour pros.

They’re obviously very unique in their skill set, and they practice these shots for hours on end every week.

A more realistic goal will be to at least understand how all of these factors come into play and to work towards improving your execution on each so that you can see some increase in your spin rates.