Let’s face it. Golfers are obsessed with distance.

We’re all fascinated when we see a Rory McIlroy drive that carries over 300 yards. Or a Dustin Johnson 5-iron that goes 220 yards.

And how about that Brooks Koepka pitching wedge that he hits about 150 yards!

Well, we all know that those golf club distances are unrealistic for the average amateur golfer, but we still can’t help thinking about our own yardages in comparison.

And, at the very least, we wonder how our own yardages compare to other amateurs.

Am I hitting my clubs as far as I should be hitting them?

What is the right distance for each club? 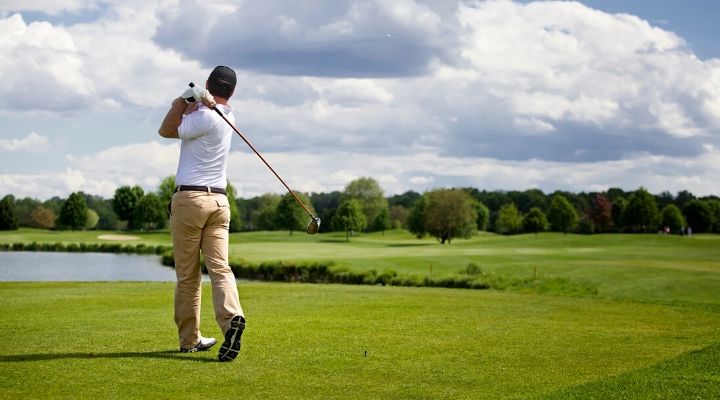 When it comes to the yardage that you hit each club, the fact is that there’s no right distance.

Too often, higher handicap players simply pick a club that they think will reach the green, but they don’t really know for sure.

The end result is a lot of shots that come up short of the green or (less often) shots that go over the green.

Having a solid understanding of how far, on average, that you hit each of your clubs will make you a better golfer.

You’ll make better decisions about which club to use on any given shot, you’ll have more confidence that your shot will carry the right distance, and you’ll make fewer distance mistakes due to mis-clubbing.

It’s been shown that most amateur golfers think they hit their clubs farther than they actually do.

When asked how far they hit each club, mid-to-high handicappers tend to overestimate by a fairly wide margin (not surprisingly, lower handicap players are much better at knowing their actual yardages).

This is due to an “overly optimistic” assessment of how far they can hit the ball.

The moral of the story is that, if you want to become a better golfer, you need to make an honest assessment of exactly how far you actually hit each one of your clubs.

Working off an incorrect set of assumptions about your yardages will lead to needlessly throwing away strokes during your round. 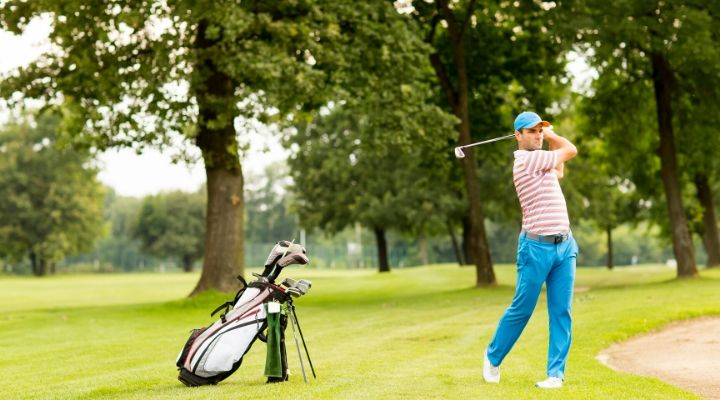 Make Sure to Use Your Average Distances

When you’re identifying your golf club distances, remember that part of making an honest assessment is to choose the yardage that represents your average distance with each club.

Go to the driving range, or even better, get on a launch monitor if you have access to one, and find out how far your clubs actually go.

Don’t use the yardage that reflects the best time you ever hit that club.

Use the yardage that reflects how far you hit an average shot.

An exercise to help you identify average yardages is to hit 20 shots with each club. Throw out the five worst shots and the five best shots and take the average of the remaining ten.

This distance will reflect the distance that you’re likely to hit that club most of the time.

Pay Attention to the “Gap”

Just as important as knowing the yardage that you hit each of your clubs is knowing the “distance gap” between each club.

This is a concept known as gapping - insuring that there are even distance gaps throughout your set from one club to the next.

Ideally, there should be consistent increments between each club so that you can have confidence that you’ve selected the right one for a particular shot.

These increments don’t have to be precise down to the yard, but you’ll have the most success if your distance gap between each club is around 10-15 yards.

"Why is gapping so important?"

Because you’ll have a lot more success if you’re able to take a full swing on a shot, rather than trying to execute a tricky “half swing” or “three-quarter swing” to manufacture a specific yardage.

The pros practice these partial swings all the time… the rest of us don’t.

What you don’t want is to find yourself stuck between clubs on a shot, trying to decide between one club that you hit farther than the required distance and another that flies shorter than the distance you need.

If you have consistent gapping between your clubs, this happens far less often.

It would be a valuable exercise for all amateurs to do some distance gapping, using a laser rangefinder or a launch monitor to identify the average distance that you hit each club, and then to calculate the distance gaps between each.

You can put these numbers on a chart to readily see not only your club distances but also if you might have some abnormal gaps that need to be addressed.

However, if your 6-iron carry distance is 150 yards and your 5-iron distance is 170 yards, that gap of 20 yards is too large and you’d likely need to have a club pro or a club repair specialist modify the loft of the club so that it’ll produce an appropriately gapped distance.

It can work the other way, too.

If you find out that your 9-iron goes 115 yards, for instance, and your 8-iron carries just 120 yards, you’ve identified another gapping issue in your set that needs to be addressed.

Five yards is too small of an incremental gap.  It would be time to see your club repair guy again.

Even though we now agree that there’s no right distance for each club, let’s take a look at the distances of each club when hit by the theoretical “average golfer.”

The table below has been created to illustrate average distances, for both men and women, for each club in the bag.

As you can see, the chart differentiates distances based upon skill level, showing yardages for a high handicapper, for a low handicapper, and for the golfer who falls in between.

While it’s interesting to see how far others hit their clubs, the only really meaningful information is how far you hit yours.

Having a solid grasp on your distances will help you improve as a golfer.

Guessing which club to choose for a shot, or selecting a club based on inaccurate information or faulty assumptions, will cost you strokes on the course.

Take the time to figure out your average distances with each club.

It’ll be well worth the effort.