How to Hit a Stinger in Golf (8-Step Guide)

Everyone wants to learn how to hit a stinger.

After all, what a cool name for a golf shot, right?

The name alone conjures up an image of exactly the type of shot that it is:

A low trajectory bullet that stays close to the ground and runs out a lot once it lands.

For those that may not be familiar with this shot, the term “Stinger” was actually popularized initially by Tiger Woods.

Back in 2006, when Tiger was routing the field at the British Open at Royal Liverpool (Hoylake), he unveiled a shot that he ended up using dozens of times during that Championship.

Golf fans everywhere were amazed at the 2-iron missiles that he hit off the tees on the hard, baked-out course, shots that seemingly never got more than 20 feet off the ground.

But because of the firmness of the ground, these shots (which Tiger dubbed his “Stinger”) would roll out to about 280 yards, and often even longer.

What a weapon to have at his disposal.

A straight, controlled shot that he could reliably put in the fairway, taking advantage of the ground conditions and staying under the wind.

In fact, the shot was so effective for him that week that, in 72 holes of golf, he only used a driver one time!

And he went on to win that Open by 7 shots, forever memorializing the name he gave to the shot that helped him win his 11th Major.

Prior to Tiger labelling this shot as his Stinger, golfers had been hitting this type of shot for as long as the game had been played.

Until this new name for it was bestowed, everyone had referred to this type of shot as a “knockdown” shot.

To be sure, however, it’s not likely that anyone had ever hit a knockdown shot off a tee with the kind of power, penetration, and precision that Tiger displayed that week with his Stinger!

Is the Stinger/Knockdown Shot the Same as a Punch Shot?

The Stinger, although it can be used for any long shot, primarily refers to a tee shot for which the golfer elects to forgo hitting a driver.

As such, it is intended to be hit for distance, albeit for less distance than would normally be expected with the driver.

The punch shot, on the other hand, usually describes a somewhat shorter shot that is utilized to get out of trouble or under some impediment, such as low-hanging branches.

Because the ultimate objective of both is a low ball flight, however, similar swing mechanics are employed, and we’ll discuss them shortly.

Should I Try to Hit Tiger’s Stinger Shot?

There will certainly be times when you will face conditions that call for a low, boring trajectory on your tee shot.

Typically that would be when you are hitting into a strong wind or a crosswind.

But if you learn to hit a knockdown shot fairly well, it could also be an effective weapon on tight holes when accuracy is important and you need to be in the fairway.

The hallmark of the knockdown shot (aka Stinger) is control.

You’d choose to call on this option when you need to manage your ball flight and when the conditions call for it. 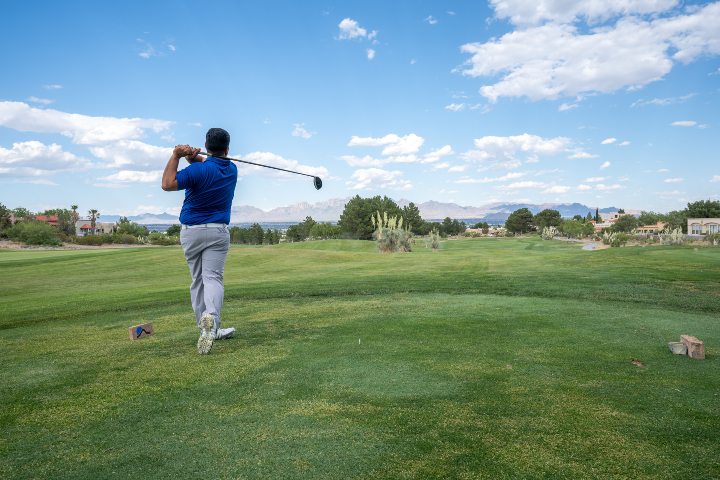 First of all, let’s talk about club selection.

Even though the Tiger version of this shot at Hoylake was hit mainly with a 2-iron, it can actually be done with almost any longer club.

Nowadays, most golfers don’t carry 2 and 3-irons, so your “stinger” could be hit with a 4-iron, a lower-lofted hybrid or maybe even a 3-wood.

Here’s how to hit a stinger shot:

1. Start With the Ball Back in Your Stance

Perhaps an inch or two further back than your normal ball position.

Having the ball back like this will put your hands slightly forward, which is important to execute this shot correctly.

Be careful not to place the ball too far back, though. When it’s too far back, it will cause you to have a very steep angle of attack, which will put more backspin on the ball.

Backspin causes lift, while the goal is to keep your shot low to the ground.

2. Choke Down About an Inch on the Grip

This will give you better control.

This is not a punch shot, so your goal is to get reasonable distance.

Therefore, make sure you take a smooth, full backswing.

Even though you’re taking a full swing and want reasonable speed, you should avoid swinging as hard as you can.

That’s good advice any time, but particularly on The Stinger.

The reason you want to avoid swinging too hard is because you want to take spin off the ball to keep it low.

As stated above, too much speed puts backspin on the ball, and backspin makes the ball rise, which is what you’re trying to avoid.

5. Hands Ahead of the Club

Coming into impact, you should make sure that your hands have stayed ahead of the club, so that there will be some forward shaft lean.

To “cover the ball,” your chest and body moves down toward the ball in your downswing, and your sternum stays over the ball through impact.

And here’s the key to the Stinger:

At impact, your left wrist should be bowed.

This essentially means turning the knuckles of your left hand down toward the ground.

This will deloft the club face and produce the low trajectory that you’re looking for.

The Stinger calls for an abbreviated follow through, with your wrists staying firm to the finish of the swing.

While it takes a little skill and a lot of practice, learning how to hit a stinger is one of the wisest decisions a golfer can make.

If you’ve ever played golf in a strong wind, you’ve seen the impact that it can have on your ball flight.

In these kinds of conditions, it's often best to play beneath the wind, hitting shots on a lower trajectory so that they aren’t subjected as much to the wind’s effects.

Once perfected, it’s also a shot that offers a lot of control.

On tight, tree-lined holes, or when you simply need to find the fairway, the Stinger can become an excellent go-to option for you.

Work on the set up and swing modifications that we described, and you will add an element to your repertoire that will make you a better golfer.